Prosecution of the Perpetrators

Left to right: Major Eugene S. Cohen, Lieutenant Jack H. Taylor and Jack R. Nowitz. The US secret agent Jack Taylor had been prisoner in Mauthausen for several weeks after his capture; after his liberation he wrote a report about the time of his imprisonment. Jack nowitz functioned as translator and assessor during interrogations of witnesses. (photo credits: US Signal Corps Foto, Courtesy of NARA)As an increasing amount of information was gathered about the mass extermination of prisoners in the concentration camps, the Allied military authorities soon also directed their investigations towards the war crimes committed in the concentration camps. Their main objective in this regard was to gather concrete evidence for the forthcoming court cases against the perpetrators.

A team of investigators of the War Crimes Commission of the 3rd US Army, headed by Major Eugene S. Cohen, gathered a wealth of evidence in the liberated camps Gusen and Mauthausen between 6 May and 15 June 1945. The result was a dossier that not only included witness reports gathered locally, but also a long list of names and dates of SS members as well as photographs of the camp and of instruments of torture that were used there. The so-called ‘Cohen Report’ was used as evidence at the main war crimes trial in Nuremberg and it also served as basis for the first Mauthausen trial before a US military court in Dachau in spring 1946.

Help from former prisoner functionaries, who risked their lives to save important documents from being destroyed during the final days of SS rule played a crucial role when collecting evidence. One of the most important preserved documents for the prosecution of the perpetrators at Gusen was the death book from the sub-camp Gusen, which had been kept by the garrison physician in Mauthausen, where it was also seized.

Excursus: The capture and interrogation of Ziereis 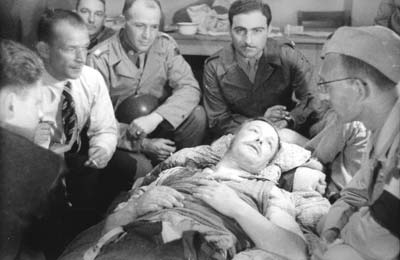 Examination of camp commander Ziereis, 23./24. of may 1945; the photographic documentation of the interrogation of the Mauthausen camp commander was undertaken by former Spanish prisoner Francisco Boix, who took many photographs in Mauthausen documenting the conditions in the camp after liberation. He was present during the Ziereis interrogation in Gusen by order of the American Mauthausen camp commandant Seibel. (photo credits: Museu d’Història de Catalunya, Barcelona: Fons Amical de Mauthausen)On the morning of 3 May, Franz Ziereis, commander of the concentration camp Mauthausen and in this capacity also commander of the camp Gusen, left Mauthausen to hide from the allied troops in his hunting lodge in Spital am Phyrn together with his wife Ida and their three children. Almost three weeks later, on 23 May, he was apprehended by a patrol unit of the US army accompanied by former prisoners and shot when attempting to escape. Ziereis was seriously wounded and taken to the American 131st Evacuation Hospital in the former SS barracks at Gusen, where he was interrogated for several hours by members of the US army, including commander Richard R. Seibel who was responsible for camp Mauthausen, and several former prisoners.

On the evening of the 24 May 1945, Ziereis died from his injuries in the military hospital in Gusen. The original interrogation document was handed over to Colonel Seibel and served as evidence in the forthcoming war crimes trials. Further records were drawn up by former prisoners who had attended the interrogation session. As a result, several versions were in circulation, which were, however, largely identical in content