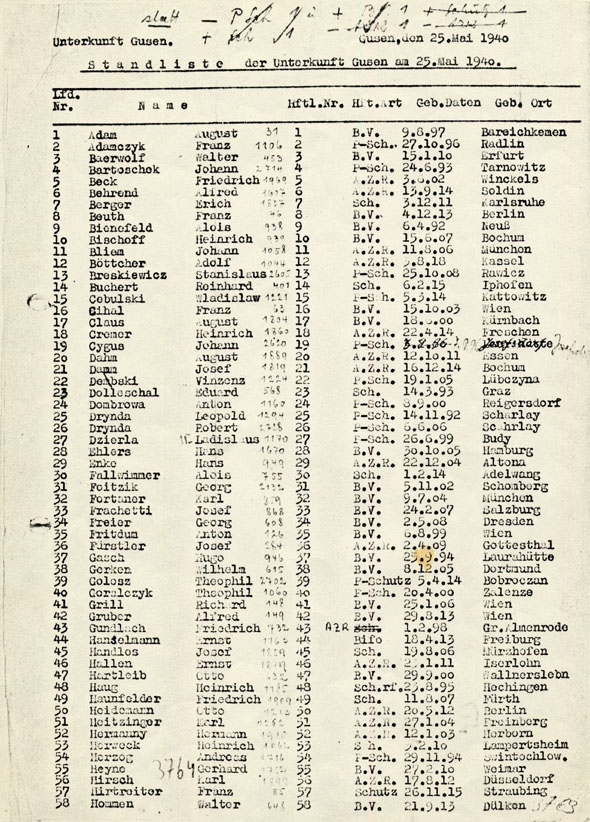 The prisoners listed in this document, the majority of them German prison trustees, formed the camp’s “original complement”. (Mauthausen Memorial / Collections)The concentration camp at Gusen was originally intended for the persecution of political opponents from the territories of the Reich, i.e. including annexed Austria. The majority of the DR-prisoners (Deutsches Reich/German Reich) were classified as “criminals” (“BV” or “SV” prisoners), accused of being “antisocial”, or simply discriminated against based on their homosexuality, race, or creed.

Though the DR-prisoners at Gusen soon formed a minority of only a few hundred individuals, they occupied most of the important positions within the coercive prison society. From December 1942 until the end of 1943, more than 2.200 German SV-prisoners (Sicherheitsverwahrung/security detention) were brought to Gusen. Based on an agreement between Himmler and the Minister of Justice Thierack, these prisoners were destined for “extermination through work” at the concentration camp. By April 1943, over 1.500 of these SV-prisoners had been killed, and the number deaths among SV-prisoners eventually rose to a total of approximately 2.000.

On the eve of the liberation, Gusen still held about 1.200 DR-prisoners. Though, in general, prisoners listed as German nationals had a higher chance of survival, 3.300 of the 5.400 DR-prisoners died at Gusen.