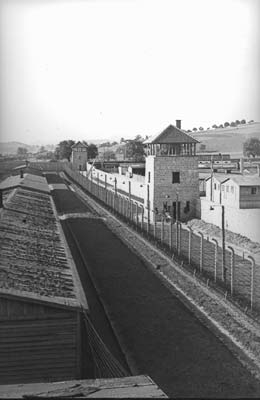 Northern wall of the camp with watchtower, presumably spring 1943 (photo credits: SS-photo, Courtesy of Museu d’Història de Catalunya, Barcelona: Fons Amical de Mauthausen)At first, the prisoners camp was enclosed by barbed wire and wooden fencing with four wooden watchtowers. During summer 1941, prisoners began to build a 3-metre high wall using granite rock from the nearby quarries. At the same time, three watchtowers were built in the north and two in the south, all with shooting ranges, machine guns and alarms. Guards, the so-called ‘kleine Postenkette’ (minor line of watchmen), constantly patrolled the areas between the wall and the barbed wire, which was charged with high-voltage current. The wall represented the physical divide between prisoners camp and outside world by locking in the prisoners and by obstructing the view into the camp from outside.