Nurses of the 131st Evacuation Hospital caring for patients in the former SS-Barracks, Camp Gusen I, May 1945. (photo credits: priv. coll. of Mrs. Mary Traub, 2nd Lieutenant, 131st Evacuation Hospital; Courtesy of Mary Traub)In order to be able to ensure medical treatment of the sick and weakened prisoners, the US camp administration needed to request the assistance of military medical units. In addition, they recruited 10 medical doctors from among the ranks of the former prisoners and employed the local population as nurses.

On 9 May 1945, the 131st Evacuation Hospital, a mobile military hospital with 30 doctors and medical orderlies as well as 40-50 nurses, proceeded from southern Germany to Gusen by order of the 3rd Army Command, becoming operational the following day. It took only four days to clean and delouse the eight SS barracks south of the camp and to equip them with a total of 1500 beds. Another ward was subsequently set up in the workshops north of the camp. 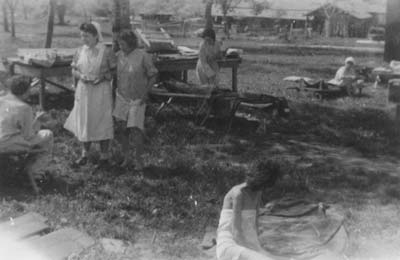 Open-air medical care for female patients near the camp hospital, May 1945. (photo credits: private property of Mrs. Mary Traub, 2nd Lieutenant of the 131st Evacuation Hospital; Courtesy of Mary Traub)The sick quarters in the prisoner camp itself were systematically evacuated and the patients transferred to the hospital, together with seriously ill individuals from the main camp of Mauthausen. Those patients who had recuperated sufficiently were housed in the camp or in hospital facilities in the surrounding area. Despite the dedicated care of the 131st Evacuation Hospital, every day still saw dozens succumb to tuberculosis, typhus, dysentery, or general malnourishment.

As a result of the ongoing repatriation of prisoners – as of 3rd June 1945 more than 4000 of them had already been transported to their country of origin – the camp was gradually emptied. On 22 June 1945 the 131st Evacuation Hospital also left Gusen. 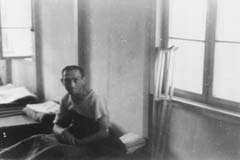 Patient in care of the 131st Evacuation Hospital, May 1945. (photo credits: private property of Mrs. Mary Traub, 2nd Lieutenant of the 131st Evacuation Hospital; Courtesy of Mary Traub)„We saw with shudders of horror the emaciated bodies of the inmates and the stench of death hung in the air. We saw bodies piled high and the German civilians were laying the bodies in the crates and a bulldozer was used to push the dirt over them. (…)There were people lying around everywhere. In fact so many that they hadn’t had time to pick them up – they had all died from starvation. (…) We then went through some of the wards where there were three to four people in a single bunk full of typhus fever, dysentery, tuberculosis and every other type of disease known to man. The dying were sleeping with the dead and most were so weak they couldn’t get out of bed.”
Excerpt from: Account of Mary R. Bergquist, form. nurse of the 131st Evacuation Hospital (USHMM, Washington)